“So the soldiers took charge of Jesus. Carrying his own cross, he went out to the place of the Skull (which in Aramaic is called Golgotha).” (Jn 19:17)

The Garden Tomb and Place of the Skull (which is what “Golgotha” means) are one of the places it is believed that Christ was crucified and was buried. The two are not very far apart—one on either side of this park-like location. The site of Golgotha is disputed; there is a site within the old city, the Church of the Holy Sepulchre, that has traditionally been the site, but now they know that the walls of the city as drawn during Jesus’ time would have that location within the walls. But since they led him out of the city, it probably is not the site.

In the cliff shown in the picture in this layout, you can see a rock formation that looks like eye and nose sockets in a skull; click on the layout if you need to see it larger. In the bus repair lot below those rocks, skulls were found, thus making this a more likely site for the crucifixion. 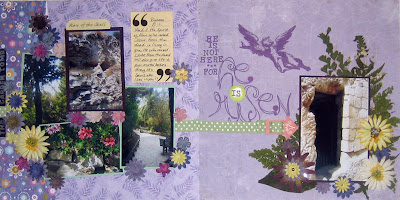 “He is not here; He has risen . . . ” Mt 28:6
The Garden Tomb is a serene park with winding pathways, lovely flower gardens, benches, and areas for visitors to be seated as docents explain the location. A comment made by the man who led our group through this site was quite profound:

“We don’t know if this is the actual site of the crucifixion and burial of Christ. But I’m glad it isn’t known for certain, or we’d build a church on it and worship the site, not the Man.”

The paths through the site lead up to the tomb; it is a large flat rock wall, and has an opening hewn from it (close up of layout below). In front of the tomb, running along the wall, is a groove along which a stone would be rolled to cover the tomb’s opening.

We were able to step into the tomb itself; it was a very small “room” with cream/tan colored rock, hewn out probably by hand. There is a door that covers the opening, (which stands ajar unseen from the outside while the site is open), and on it is a sign declaring:

HE IS NOT HERE — HE IS RISEN 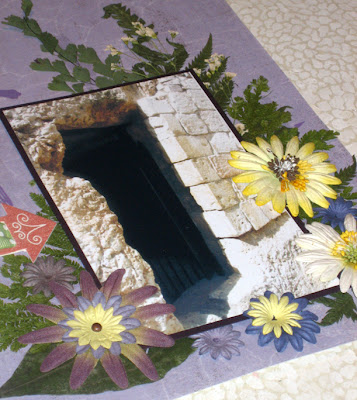 Today in particular, I’m really glad about this news. He is not here, He has risen. He sits at the right hand of the Father. He reigns. Today I have a lot of questions in my mind, but I know He is on His throne no matter what happens here on earth. He knows that I lost a friend this weekend . . . her name is Sue, and she had a brain aneurism on Friday while at her office. She was rushed to the hospital, and her husband made it there 10 minutes later. They thought for a time that they could save her with surgery on Saturday, if they could stabilize her overnight, but she didn’t make it that long and was declared brain dead. Today they are searching for people to donate her organs to.

That’s the story of her death. Let me tell you just a little of her life. She was a wife, a mama to kitties—regularly was taking in new ones! She was so active, loved ministering the love of Christ to others. She worked at Boeing, she volunteered for her church and a lot of other organizations, was so healthy and active, rarely sitting still! Our friendship had distanced over the last years as I moved to another town and went to another church, but her friendship was so important to me at the time I knew her best; weekly she and Myrna and I met, praying together and supporting each other through all sorts of things.

This coming weekend Sue was supposed to lead a Cursillo (a women’s retreat) that she had planned over the last year; she was so excited, and I don’t understand why the Lord took her now. That’s one of my questions for Him someday. But I do know this, He is not in the grave, He has risen, and He is on the throne today just as He was when Sue was alive.