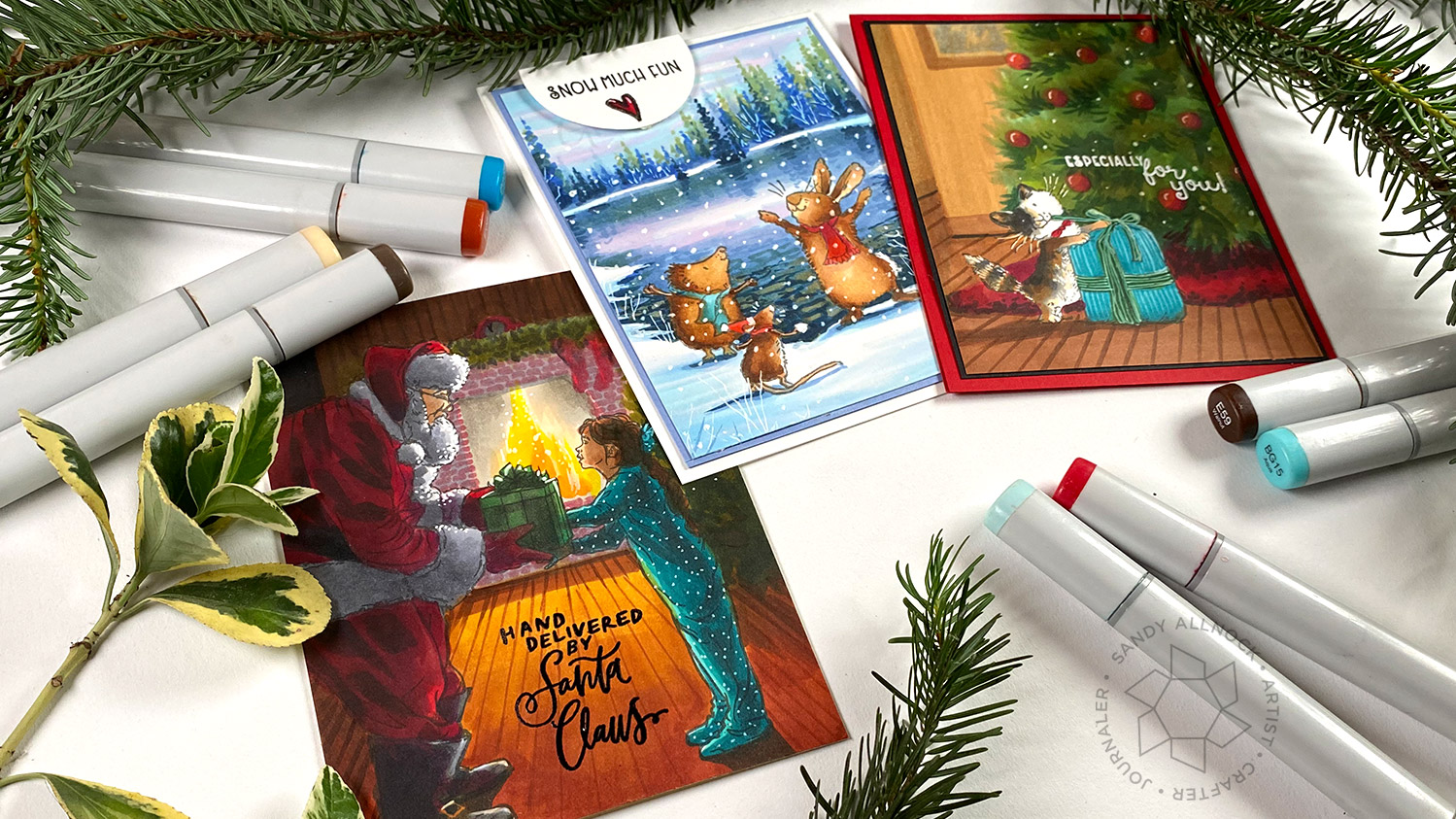 A common challenge for a lot of us as Copic colorists is keeping the marker where we WANT it rather than where IT wants to go! In today’s post I’ll give you the things that I know cause it and some ideas how to fix it.

While the cards are some of my epic scenes – don’t worry, the tips here ARE for beginners too! I don’t do all the coloring, just a smidge of each one to demonstrate with. I’m trying to work out some scenes for holiday-themed classes to launch this fall, so these new stamps from Colorado Craft Company were perfect to get the ball rolling.

These scenes have classes associated with some – and each one lists what they would be. There are FREE tutorials on a whollllllle bunch of other CCC stamp sets collected right HERE.

In the video I talk through some ideas – and below there’s more info written up about each one. Watch below or click HERE to view this on YouTube.

Links mentioned in the video:

First, how does bleeding happen?

Lots of us get obsessive over that *perfect* blend. And we pour lots of liquid into the paper as we try! Constantly going over and over an area is what oversaturates it and makes the color bleed past the line.

I started creating scenes years ago to cover up goofups! Partly from bleed, but lots because I work fast and go outside the lines sometimes. Your scene doesn’t need to be a full one like mine – but you can learn how to make a simple treeline behind the area of bleeding…that can cover the problem but not require more than learning how to draw a line of trees.

I get it that none of us are independently wealthy….but stress over bleeding and an inability to blend costs too – you’re paying in ink by having to work so hard! I haven’t colored on the Georgia Pacific 110 from Walmart in years, and when I did – I remembered why. It creates a mottled surface that looks yukky and makes me want to rework and rework to make it smooth….and thus the bleeding begins! You don’t need fancy topline art papers – but if you have consistent bleeding problems, try some other papers and see if that’s the problem.

Use more hues to blend with

While we all hear about using three colors – a dark, medium, and light – there’s no law against using more! If you have a smaller step between shades, it’ll be easier to get a good transition between them, especially with fabric folds, as seen in Santa’s pants in this example. Use 6 or 7, go for it!

If you use a craft mat – plastic, glass, or a table – you might be causing yourself trouble! I always put a scrap piece under what I’m coloring so it will absorb any color that bleeds through the back of the paper, so it doesn’t push back UP into my coloring area. Blending happens within the fibers of the paper, by the way, so it’s very normal for color to bleed through. It’s a good thing.

Sometimes, the only thing left to do is grab a white pen and make a repair! I’ve tried out a lot of white pens and love the uniball signo white gel pen – I know it doesn’t work for a lot of people, and I recommend being sure you aren’t smashing the pen on the paper out of rage that it’s not working (lol)…..there’s a “ball” at the tip of the pen and the liquid needs a place to move all around that ball to get to the paper, and smashing it closes off that ability to move.

But you can also pay attention to the amount of fine detail to be colored: got tiny itty bitty spaces that need to remain light? Use colors that you don’t have trouble with bleeding. Reds are notoriously bad!

There are FEW white mediums that’ll be 100% superbright white when they’re overtop of Copic, by the way. Copics have alcohol ink in them, and it’s absorbed into the white medium in pens.

Draw the viewer’s attention to a different place than the location of the bleeding! I struggled with the sleigh below, so decided to put a big moon in the middle of the card. With a rich night sky around it, the viewer is drawn to the light – anywhere there’s a place with the darkest of darks next to the lightest of lights, it unconsciously signals to the viewer to look there! And when it comes to winter scenes especially, snow achieves a lot of that naturally.

There’s a bit of misunderstood principle of Copic blending – that the paper has to be really wet with ink in order to blend. In some ways, yes – but you can take a piece of partly colored paper that’s been sitting overnight, and go right back in to work on it again. You’ve probably experienced that, right? So if your piece is on the brink of bleeding – and you know that feeling of dread well! – then just let it sit for a little bit. In the card shown, I went from one area to another to keep letting color sit and rest for a few minutes in between.

A nonCopic card here too, since it’s still World Watercolor Month! I created a big piece of paper using garden greens, and cut it up to make a bunch of cards. I used a black layer under the watercolored panels, then some dimensional adhesive was used to attach it to the card. They’re simple and elegant!

Some product may be provided by manufacturers for review and use. Compensated affiliate links are here at no cost to you. If you choose to shop using my EH (Ellen Hutson) links, please accept cookies on that site in order to retain the link to my blog, or that compensation does not happen for me. I appreciate your support of my work with your purchases! Full affiliate and product disclosure | My trusted partners in art

Have you downloaded the app yet?