“And if the Spirit of him who raised Jesus from the dead is living in you, he who raised Christ from the dead will also give life to your mortal bodies through his Spirit, who lives in you.” —Romans 8:11 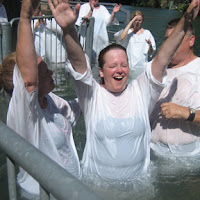 I was baptized as an infant on April 27, 1964, and I am forever grateful to my parents for that! I was confirmed as a teen, confirmed in another denomination as an adult, and for the past few years, I had been thinking about being baptized as an adult. But I had been thinking about what statement I was making in my heart by considering this. Was I negating what my parents did? Did the infant baptism not “count”? Did it not “stick”?

When in Israel, I decided that this was an opportunity not to miss. Yardenit was not the site where Jesus was baptized, but it’s the same river—and since I had no idea if I would ever make it back there, it was a decision that suddenly became easier!

The site is well-organized and beautiful; they charge $6 for the rental of a robe and towels, abd use of the changing room; and we were warned ahead of time to wear swimsuits because, as our Israeli guide said, “The robes, they become clear when wet!” Not quite clear, but very see-through!

We proceeded to an area where our busload gathered separately from other groups; that was nice to have a separate space. We had about 15 or 20 I think from our group who were to be baptized. The fish nibbled at our toes, the water was cool, the day was hot, and several pastors were on-hand.

When I went down into the water, I thought somehow this was just me making a commitment to God for myself. (Yes, I have the tendency to think it’s all about me!) But when I came up—it was as if I felt a surge of God’s power coursing through me, and a million thoughts came at once. I suddenly knew that with Christ, things I’d been trying to do on my own and given up on were now possible. Things I kept failing at were possible to overcome through Him. Now, I’ve been a Christian for a long time, I thought I knew these things. But this moment it all became sharp and clearly in focus—and I no longer need to give up and just accept my failures, I can overcome! I was delighted that Melinda assisted with some of the baptisms; I had only met her in Israel since she isn’t a member of my church; she prayed over me afterward and it was quite powerful. I don’t know if I’ll ever see her again, but if she ends up reading this entry—thank you, Melinda!

This two-page layout was so much fun, even if it took longer than *I* thought it should! I had so much to document . . . and I think I added enough small journalling bits that I covered most of what I wanted to! See below for more details. 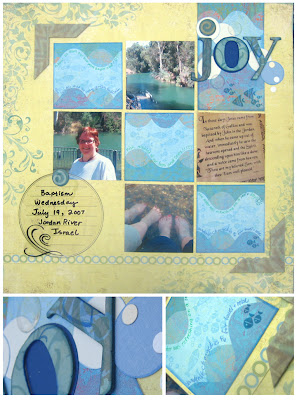 On the left-hand page, I included the blocks of paper that looked like water, added a few stamped fish, and journalled some details along the curves of the “water,” things like the fish nibbling at our toes and the temperature that day. 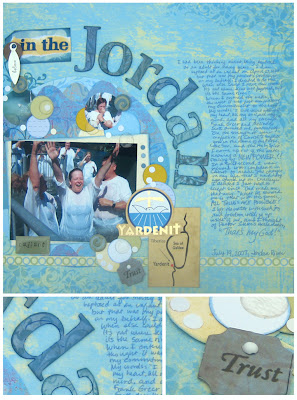 The right-hand page journalling talks about the spiritual side of the event—what I was thinking at the time, my words, the pastor’s words, and what I felt afterward. This will be a memory to treasure‚ it’s not a day I ever want to forget!

Background paper is Basic Grey (I think?). Chipboard title is from a chipboard set called Life’s Blessings from Colorbok, as is the “Trust” tag. The round acetate journalling tag by Hambly. Background swirl stamps by Fancy Pants and Autumn Leaves.